After feeding the thousands who gathered around him, he sends them away so that he can have time alone to pray.  Late at night, he intended to walk on the sea, not seeking the attention of his disciples.  Yet, they saw him walking across the water and became fearful.  Jesus had scolded them once before about their lack of faith during the storm.  Surely they would be punished for not learning from their previous encounter, especially when exhaustion confronting a headwind seems to be their only difficulty. 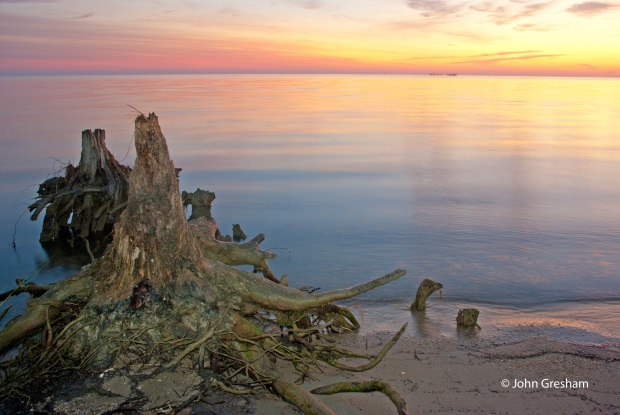 Dawn on the Stumps (© John Gresham)

Declarative words of comfort and a hand of mercy is what Jesus gives to the exhausted and fearful followers.  “Don’t be scared!  Recognize who I am.”  And not only does he speak, the Teacher gets in their boat and causes the wind to cease.  Instead of just punishment, we see patience.  His word is stern.  But, he doesn’t do to them as they deserve.  Indeed, he acts in undeserved kindness.

Let’s not be to ready in judgement and justice.  Some fail out of simple exhaustion.   We are weak when we are tired.  Let’s be firm in reassurance and act in grace toward each other in such times.  There is more good to be done in this day before the night falls on all of us.