Homecoming is the Sunday worship service where we invite friends and relatives who have left the community to return to their home church for worship and a large dinner. It is often the beginning of a week of revival services.

But when he was still a great way off, his father saw him and had compassion, and ran and fell on his neck and kissed him.

In a distant country, the prodigal son has fallen to feeding the pigs and desiring their food.  By the divine presence of God on the mercy seat between the cherubim, the Holy Spirit gives the son the ability to come to his senses and return home.  When he does, the father who is the I Am does not sit in his home on high to wait for the son.  He runs down to lovingly meet him while he is still a far off.

Every now and then, we hear sermons of a Father that is to mean and scary to come home to. There is an historic sermon from the Colonial Puritan preacher Johnathan Edwards entitled “Sinners In The Hands Of…

First, I owe a great-big apology to Van Ness Colbert for being late with my response to this one.  I meant to give you a well thought out answer on Sunday when you first posed the question.  But, this has not been a good week for well thinking for me.  Nevertheless, here is my two-cent answer to your question:

Is there a difference between praise and worship?

To me, the answer is a bit obvious.  Worship is the totality of the time that we intentionally spend with God.  From the days of the tent tabernacle to St. John Chrysostom’s Divine Liturgy, people are called together with the intent purpose of taking part in the songs, readings, sacrifices, rituals, and gathered fellowship to show their dedication to the divine.  Praise is but one facet of worship.  It can occupy a separate portion of the worship experience, or be done in conjunction with something else (usually during hymns or when the preacher is “closing out” the sermon).
I am more than a little disturbed when people blur the lines of praise and worship, as if they are one in the same.  Even in the Church of God In Christ (COGIC) tradition, there were well defined places in the worship where the congregation was encouraged to express themselves vocally and to be in reverent silence.  I am afraid that we tend to want to verbally respond so much that even the reading of scripture has become a place for “praise breaks.”  Paul taught the Corinthians in his first letter to them that God is not the author of confusion but of peace (14:26-38).  But, we tend to excuse these infractions as “being caught up in the Spirit.”    Often, people are so programmed into  an expected response that they will go overboard in praise.  With some, it is because they have had a genuine experience with God doing something miraculous or bringing them through a great trial.  With others, it is because they think this is the way they are supposed to respond.  I have no problem with giving praises to God.  I think we should “Let all things be done decently and in order”  (I Cor. 14:38) in worship.

I have a question. I have a good friend who is a Baptist preacher and very open to discussing the church. However, he recently sent me the following pm:

“So I guess the flaw in the Orthodox Church is its prejudice against other churches…considering the post with the quote from Cyprian. The more I look into it the more uncomfortable I get when it comes to how Orthodoxy views me. It’s almost offensive.”

How do I respond?

First of all, I think this preacher needs to look at the background of St. Cyprian‘s writings.  The Roman bishop  Novatian took the position that Christians that stopped being Christian during the Roman persecutions could not be permitted back in the church except by re-baptism.  Cyprian thought this was too harsh a standard and allowed the truly repentant “backsliders” back into the church.  He wasn’t criticizing any of the heretical movements of the time, but the Novatianist who put up a ridiculous obstacle for lapsed Christians to come back into the fold.
Cyprian was writing in the third century under third century circumstances to third century issues.  Would he be harsh against us Protestants who have little or no exposure to Orthodox Christianity?  Of course not!  We aren’t heretics.  We didn’t reject and rebel against the apostle’s doctrine as taught by the fathers and the ecumenical councils.  We Baptist rebelled against the more acceptable Protestants who broke away from the Roman Catholics.  In Bible colleges and seminaries, we don’t really study Orthodoxy because we are being prepared to serve in our own denomination.  So, to think that the Orthodox Church has some sort of prejudice against us is not the case (there are individual bigots in every church including us Baptist).
Rather than feel uncomfortable about the Orthodoxy because of statements by an ancient saint that weren’t directly applied to our time, the words of a modern saint (not yet canonized) are far more helpful.  Fr. Seraphim Rose’s reply to an African-American catechumen speaks to all who are uncomfortable when studying Orthodoxy:

We should view the non-Orthodox as people to whom Orthodoxy has not yet been revealed, as people who are potentially Orthodox (if only we ourselves would give them a better example!). There is no reason why we cannot call them Christians and be on good terms with them, recognize that we have at least our faith in Christ in common, and live in peace especially with our own families.

I will try not to be slack in answering questions again. 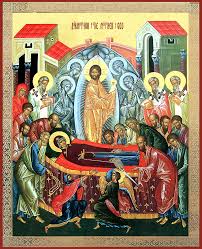