I rode over to the church with Fr. Justin and Turbo.  One day, I’d like to take a road trip with these brothers.  They seem full of great stories, wisdom, and just cool dudes to hang out with.  The day began with the Rite of Sing of Psalms with Toparia, Epistle,  and Gospel.  Let’s just call it Matins prayer on steroids.  In my normal discipline, it is just me, my icons, prayer books, a candle, and some (Dollar General) incense.  This morning worship had more Psalms (duh) and prayers, some I was familiar with.  Others were a bit new to me.  Again, one of the most beautiful things about the worship is that we were all together.  Another thing that was great was the meditative nature of such worship.  There is no entertainment value in a group of nuns singing and chanting and the congregants following along.  It is a call for reflection and repentance in the presence of God. I cannot tell you how many times “Lord, have mercy” was rapidly prayed.  Plus, there was a sermon from Fr. Maximus Cabey.  He is the pastor of an OCA church in Green Bay, WI.

Growing up as a black Baptist in the south, the idea of a black pastor in a liturgical church (except for the Episcopalians) seems odd to me. Yet, Fathers Maximus, Moses, and Jerome Sanderson serve in what I grew up believing in “white” churches.  “Dead white” churches at that because they were not Baptist, Pentecostal, or (at least) Methodist.  While I am not myopic to think that there is no racism in the Orthodox church, it seems that there may be less in the ancient faith than their is in Western Christianity.  The challenge is to make the faith known. 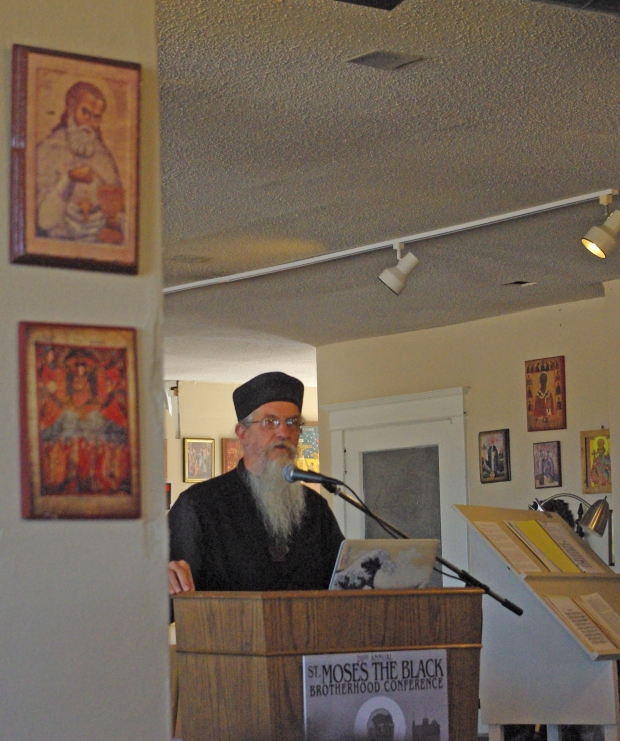 This is the great thing about the Brotherhood of St Moses the Black.  Yes, the goal is to bring Orthodoxy to African-Americans.  But, it is not exclusively black in membership nor target audience.  I was blessed to meet a white sister, Sarah Motley, from Roanoke who had been going to these conferences for six years.  I will work with her to form a Virginia chapter of the Brotherhood.  In a Sunday School lesson, Fr. James Purdie taught that Orthodoxy has it’s roots in Africa.  Yet, it is deeply embraced by Eastern Europeans.  Serbs pray the prayers of St. Macarius of Egypt.  Russians refer to the doctrines of St. Cyprian of Carthage.  Any Greek will tell you that St. Athanasius’s enemies referred to him as the “black dwarf.”  If the Orthodox church is good enough for these white people, I see no reason why African-Americans ought not learn about and convert to this ancient faith that Africans were very instrumental in establishing.  The Brotherhood is named for an Ethiopian (I think one of those really dark skinned Nilotic or Para-Nilotic people rather than a brown skinned Amharic) who is widely honored by the Orthodox world for his non-judgmental kindness and wisdom.

After breakfast, Fr. Jerome Sanderson reminded me so much of my late grandfather-in-law in is lecture about living with nature.  I really should be ashamed of myself for my poor gardening and I have an Ag. Education degree.  I have been good (at one time) about walking trails and along shorelines outside of work.  I need to do more of that.  I didn’t get Brother Michael’s last name.  His work at Emmaus  House in New York is very similar to Reconciliation Ministries in KC.  Fr. Paisius Altschul continued on the theme of “The Church In the Village.”  Overall, it seems that the goal of Orthodoxy is to be a part of the community that meets the needs of the people who live there.  In the case of the fore-mentioned ministries, especially the needs of the least of these.  My challenge will be to make this community/Orthodox model apply to rural and small town Virginia.  Some things are already in place.  I just have to get up and do something.