On Christmas Day, Wednesday December 25th, 2013; I will preach my last sermon at Trinity Baptist Church. I will also resign my Certificate of Ordination in the Baptist Denomination. As of January 1, 2014; I will be a member of St. Basil the Great Antiochian Orthodox Church in Poquoson. I will also work with the Brotherhood of St. Moses the Black in its efforts to introduce Orthodoxy to African-Americans and all who seek this ancient Christian faith.

From the sermon, Stepping Out of the Boat  (http://trinitybcofwestpoint.wordpress.com/2013/12/01/todays-sermon-stepping-out-of-the-boat/)

It was the sermon that I knew I had to preach sooner or later.  Actually, I converted to Orthodox Christianity earlier than I thought I would.  My original plan was to continue to serve as the Pastor of Trinity Baptist Church for another year or two to make sure my finances were in order, had another job, and was going to receive some sort of title (although I knew the priesthood was out of the question for the first 5 years of being Orthodox).  But, I remembered the advice of a preacher who got put out of his church, “A good pastor does not stay at a church longer than he should.”

I also thought it wise to follow the advice of a pastor I looked up to since childhood, “John, if you remain Baptist, you will only become bored and frustrated.”  I had to choose between being broke or crazy.  I already had one person suffering from mental illness in my home.  We didn’t need two.  So, I renounced the Baptist denomination and became an Orthodox Christian.  People were angry, disturbed, and saddened at my decision.  Creditors have sent me some mail no one wants to receive.  No, the transition has not been easy.  I have had to stand alone as no other minister I knew of, of any race made, such a leap. 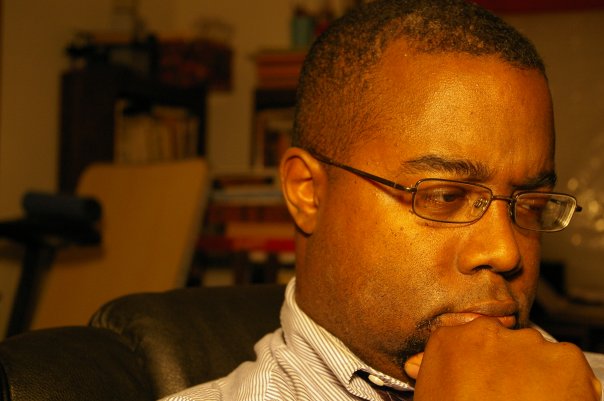 And yet, I know firmly that I made the right decision.  While I still struggle to make ends meet, God has provided the means to keep the bills paid and something in the fridge.  I am still friends with my former congregants.  My church family at St. Basil has welcomed me with open arms.  And not only they, but other Orthodox Christians and Churches have counted me as a brother in the faith.  With all of the challenges I have had this past year, I can say that I have grown in ways that I could not have had I remained where I was.

If it is God’s will, my growth in the Orthodox Church will continue as I seek to be more deeply rooted in the ancient faith.  Central to this is my personal asceticism.  I have found my rule of prayer to be the truest means to know the ways of God.  I have found a pattern of words from the church and early fathers as well as my own expressions that bring me closer to the Holy Trinity.  I see a new light to the scriptures when I read them.  The works of the desert fathers have been very influential to me and I look forward to reading other writings, including those of Seraphim Rose and the Philokalia.  Even fasting has become more of a part of who I am (although I do start to hallucinate about Philly steak and cheese burritos half way through Great Lent). 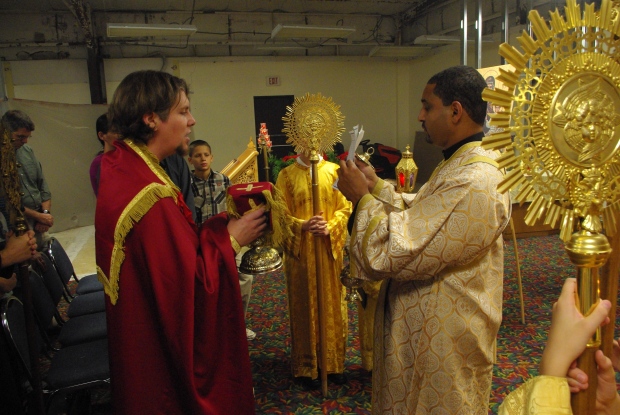 I enjoy being one of the Matins Chanters.  Reading the six Psalms (3, 37, 62, 87, 102, & 142) and chanting the Evlogateria (Benedictions) re-enforces the meaning of the Gospel.  The 50th Psalm is the call for the very first and essential thing Jesus proclaimed, repentance.  Divine Liturgy is the most heavenly form of worship I have ever experienced as the body and blood of our Lord is the focus of our worship.  We all partake from the same cup, venerate the Theotokos (God-bearer, Virgin Mary), and enjoy one another’s company during and after worship at coffee hour (the food is so good).

I look forward to the challenge of evangelization.  Fr. Adam Sexton of St. Andrews OCA has given me an invitation to speak.  I believe others will follow.  I must be mindful to practice humility at all times.  It is way too easy to think too much of myself.  It is also too easy to speak and write as if all Protestants are corrupt and doomed (I fear that I have made that mistake already and repent to anyone whom I have needlessly offended).  But, as a member of the Brotherhood of St. Moses the Black, I am excited about the prospects for sharing my faith.

I thank all of you who have read my blog articles and kept me in prayer.  May the fullness of God bless you as we prepare to celebrate the Feast of the Nativity and enter into the year 2015.

… And the disciples were called Christians first in Antioch. (Acts 11:26)

Now there were in the church that was at Antioch certain prophets and teachers; as Barnabas, and Simeon that was called Niger, and Lucius of Cyrene, and Manaen, which had been brought up with Herod the tetrarch, and Saul.  (Acts 13:1) 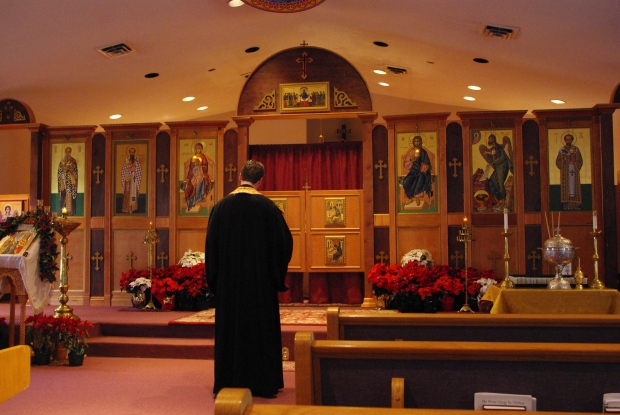 American Christianity (Black, White, whatever) has consistently proven itself to be a failure when it comes to living the Biblical racial standard.  There are exceptions in several neighborhoods across the country.  But on a whole, a major reason why we constantly have crisis moments between (and sometimes within) ethnic groups is because we do not aim to be the kind of church and the kind of Christians that were in Antioch.

Of the clergy mentioned in the 13th chapter of Acts, Lucius is clearly an African from what is now eastern Libya.  Ancient portraits of people from that part of the world at that time were considered to have some shade or another of brown with very curly hair and broad noses.  In other words, if Lucius were walking among us today, he would be considered a black man. Another of these five leaders is Simeon who is called Niger.  One does not have to be a Latin scholar to know that Niger means “black.”  The other three men in this list of early church leaders were of ancient Jewish descent.  Chances are their skin tones would have been somewhere in between what we today would call a “black” or “white” man.  Antioch was a center of trade in the Roman Empire.  People from all over the known world would have lived there from pale skinned Britons to the darkest of Nubians.  From the text, we can see that race simply did not matter.  Later in the 13th chapter, we find these men (under the power of the Holy Spirit) sending Saul and Barnabas to bring the Gospel to others in the world.  So, this model of a universal church of a multi-racial people is the standard.  From them, other communities of Christians under the same Holy Spirit would form.  The Apostles of Christ did likewise and visited other lands to establish the church.  Granted, a congregation in Scotland (Andrew) would be ethnically different than one in India (Thomas).  But, the people were to be guided by the same doctrine as they worshiped the same Father, Son, and Spirit.

Unfortunately, America didn’t read the text and study Christian history very well.  The Methodist Episcopal Church in Philadelphia PA had their black members sit in the balconies and rear seats.  Richard Allen and others rejected this indignity and formed the African Methodist Episcopal Church.  Rather than admit defeat and seek reconciliation with their freed brothers and sisters, Baptist and other denominations split along racial lines.  Whites who believed in modern outpourings of the Holy Spirit in the form of speaking in tongues failed to recognize the same gift among their black brethren and those who did did so in secret.  Dr. King was right to bemoan the state of segregation among Christians in this nation.  But, unlike with schools and workplaces, blacks and whites have become so accustomed to our religious apartheid system; neither side feels motivated to put together a movement to end it.  Individuals who dare cross the line are considered “sell-outs” who have “forgotten where they came from.”

There is a fear on both sides of the racial divide when it comes to trying to have unity in Christianity.  Neither side wants to give up the authority of their clergy and denominational governors.  Nor does either side want their music and style of worship replaced with the other, even though they often mimic each other to the point where they are indistinguishable.  And politicians on the left and right have infiltrated these bodies of Christ so deeply that race and political party are all but hand in hand.  In short, the American churches are more concerned about protecting and promoting their little kingdoms on earth than trying to live to the Biblical standard of the Kingdom of Heaven.  There are several non-denominational churches and organizations that have managed to find common ground in spiritual growth and worship and have diverse congregations.  However, most American churches are more interested in maintaining walls rather than building bridges to overcome them.

Had American churches took the example of Antioch and Dr. King’s observation to heart back in 1963 when he wrote Letter from Birmingham Jail, we would be living in a completely different America.  Not perfect.  But, the climate that we see from the recent cases of Travon Martin and Mike Brown would be either different or non-existent as their shootings may not have happened.  The church, as a whole, has failed to give America the racial climate that is in the Bible and that the Apostles taught us to have.  Black and white Christians put past pain, cultural styles, and political leanings over the Savior who has but ONE body.  Until there is serious effort to unite American Christianity, there will be more “Ferguson Missouris.”

I would love to brag that the Orthodox Church is doing a great job at healing the racial divide.  But, up until the mass conversion of 2,000 Evangelicals into the Antiochian jurisdiction, the Orthodox Church has been way too content to stay within (in the words of the late Metropolitan Philip) “our own little ethnic ghettos.”  I don’t advocate that we knock on people’s doors and pester them to convert.  But, we must make a stronger effort to let America know that we exist and that our doors are open to all people just as they were in the first century AD.