Marcus Garvey was not an Orthodox or any other Christian that I know of.  Yet, this forefather of Black Nationalism and Pan-Africanism provides a couple of doorways for African-Americans to leave the confines of Protestantism and dive into the deep waters of Orthodoxy.

Garvey was a direct influence on the African Orthodox Church.  Bishop George Alexander McGuire, a former Anglican pastor from the West Indies and ally of Garvey, sought the creation of a Christian church headed by black clergy with roots going back to the origins of the faith.  A Kenyan and two Ugandan clergymen became members of the AOC in their homelands and began seeking a connection with the Greek Orthodox Patriarchate of Alexandria.  Their churches became a part of the Eastern Orthodox Church in the late 1940’s.  In particular, the Church in Kenya faced bitter opposition from the British colonial government in the 1950’s.  The Archbishop of Cyprus dared preach against colonialism in Nairobi and won the respect of African independence leaders.  Today, the church continues to grow steadily from its grass-roots of black people who wanted an authentic form of Christianity that was not handed down to them by their colonial masters.

Garvey is better known as the man who proclaimed that there would be a black king crowned in Africa.  This statement is the birth of Rastafarianism, named after the pre-coronation name of the Ethiopian Emperor Haile Selassie Ras Tafari.  The popularity of Rastafari grew with the rise of Reggae music and its biggest star, Bob Marley.  A year before his death, Marley converted to Christianity and became a member of the Ethiopian Tewahedo Orthodox Church.  It was only natural that a man who sang about African freedom and redemption would be a part of a form of Christianity that came to Africa by the ministry of the Apostles Mark and Matthew.

For African-Americans fearful of being labeled a “sell-out” or “forgetful of where you came from” in their pursuit of Orthodox Christianity, the Garvey Factor with the witness of 2,000 years worth of the African martyrs, saints, and theologians crushes such shallow criticisms.  Charges like that do not deepen the faith of black Christians.  They only scare us from knowing more about who we are.  And when a person is too scared to know himself, anyone else is empowered to define him.  These charges keep us on familiar plantations and keep us fed on mere scraps.  While this was (only by the grace of God) nourishment enough when we had access to nothing else, we can now go to our own fertile fields and choice foods in the Orthodox world. 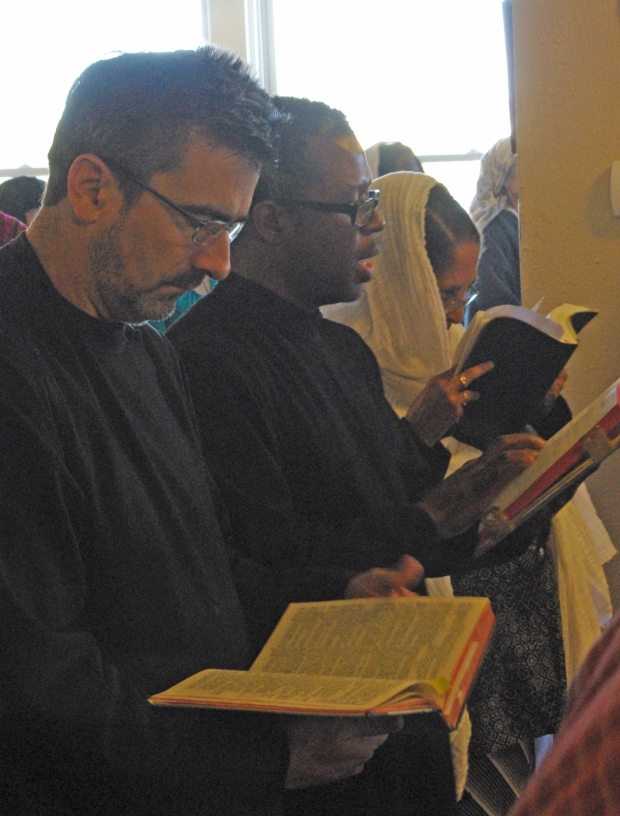 Together in worship (C) John Gresham

Do not let the critics keep you shallow and scrap fed on a plantation.  For those who have seriously looked (and peeking your head in the door and going the other direction because you didn’t want to be the “only one” is not seriously looking) at Orthodoxy and decided to remain AME, Baptist, COGIC, and etc; fine.  You made an informed choice.  If you feel your choice was right, you shouldn’t mind others investigating the ancient faith and choosing for themselves.  And if the fear of being the only black person or lack of a black clergy makes you so uncomfortable about Eastern Orthodoxy (Antiochians, Greeks, Russians, OCA, …), look into the AOC, Copts, Eritreans, and Ethiopians.  Garvey and McGuire awakened black Christians to the fact that we did not have to settle for the faith that was handed down to us by former colonial and slave masters.

I have attached a couple of resources that highlight Garvey’s influence on modern African Eastern Orthodoxy: