It is African-American History Month. And this is the first year that we observe this month under a president that wants to “Make America Great Again.”  Under the administration of his predecessor, the first African-American to hold the office, we were still the greatest nation in the world.  Apparently, the political left and right cannot, or for the sake of promoting their agendas, refuse to come to an agreement of what makes for greatness.  I am choosing to ignore their arguments because in African and Orthodox Christian history, there are consistent elements and examples of what greatness is and that we have agreed upon in all places at all times.  I will lift up one element and example for your consideration; the humility of Macarius the Great of fourth century Egypt.

One day, Macarius was gathering reeds to make baskets when Satan began to beat him with a scythe. His blows had no effect on the man and he stopped and left him alone.  As the devil was leaving, he told the saint, “I do everything you do.  You stay up all night praying, I don’t sleep.  You fast, I don’t eat.  You have one advantage over me that I cannot overcome; your humility” (1).  For those of you unfamiliar with the Sayings of the Desert Fathers (a book that African-American Christians would do well to read and study), I give you these words from the Apostle Paul; “Let this mind be in you which was also in Christ Jesus … He made himself of no reputation … He humbled Himself and became obedient to the point of death … Therefore, God also highly exalted Him and given Him a name above every other name” (Philippians 2:5-10).

The thief on the right of Christ is the upward side of the lower bar.

In both sides of the political argument, humility is tragically absent. I use this adjective because without this critical element that Jesus and Macarius lived by, greatness will not happen; except that we may achieve great failure and embarrassment.  Let’s take the right; everyone wants a strong economy with good jobs, and protection from enemies.  The desire to achieve these goals is no excuse for belligerence.  The left’s concerns for diversity, fairness, and social progress are also admirable and necessary.  Vulgarity only hurts the cause one struggles for.  And it may be that the media is drowning out the more conciliatory voices on both sides for the sake of ratings and profits (I don’t doubt this at all).   But, with few (if any) voices on either side are pointing out to humility as the means of achieving greatness, calling on God to bless America or saying that God is on our side are empty words that will generate atheism faster than anything Charles Darwin could have dreamed of.

It will not be any political leader or party that will humble the heart of America. It will take the masses to embrace the mentality of our Savior and the African saint (and I welcome a similar spirit from those of other faiths and no faith).  For African-Americans, perhaps a deeper look at the humility of our forefathers would help.  Not every slave was Harriet Tubman or Nat Turner.  The very existence of devout Christian slaves whose spirituality went deeper than that of their masters was an indictment against the false Christianity of the American South and their friends in the North.  For a modern example, Muhammad Ali beat George Foreman by laying on the ropes and taking hard punches to tire out his opponent.  And at the right time, he fought back.  For the Orthodox Church, while we do pray for our Cesar’s, we don’t comply with their spirit.  Many of our greatest saints rejected the popular wave of Christianity after the edict of Milan and fled to the deserts of Africa, Asia, and (later) the wilderness of Europe and Siberia.  Those who didn’t flee aided and spoke up for the downtrodden, rejected the excesses of their society, and pointed to the examples in the Egyptian and Northern Thebaid on how best to follow Christ.   Indeed, St. Herman and other missionaries to Alaska stood up for the rights of the natives against Russian colonial exploiters and oppressors.  To this day, Natives there choose and respect Orthodoxy over Protestantism and Catholicism because of their example.

St. Anthony was shown all of the traps the Devil had spread all over the world.  He groaned and asked what could get through them all.  Then, a voice came to him and said, “Humility” (2).  It is not so much that conservatives have to become liberals or vice-versa.  But, we have to approach one another and the issues of our country with this all-powerful virtue.  Solutions will not be easy.  But, with humility and God’s grace, we can solve our problems.  Without it, we can only expect to continue with this destructive vicious circle we are in and for it to get worse.

One of the things that drew me to Orthodox Christianity is monasticism.  These people were,and still remain, unique examples of what it is to follow Jesus.  They attend church services, at least, two or three times a day.  They pray as they work.  Their meal time is spent with the words of scriptures and stories of saints.  Except for liturgical vestments, everyone is dressed in the same, simple garments.  Monks and nuns renounce not only sinful pursuits.  They also have rejected respectable careers, loving marriages, decent hobbies, and other things we consider good in the worldly kingdom so that they can focus solely on the kingdom of heaven.

Of course, Jesus never called everyone to this sort of lifestyle.  But, as I journey in the faith, I see tremendous value in striving to emulate those who have.  Consider how many of us are addicted to pursuing entertainment by TV.  While some programs may be educational and it is good to keep abreast of things newsworthy (not everything in the news is worthy of attention), too much of what is on television is based on sensuality and ego-driven self-help.  Refraining from television during fasting periods and replacing that time with prayer, spiritual reading, or helping people in need does our souls a far greater good than following empty comedies and meaningless dramas.  The monastic lays aside personal gain and follows the instruction of a seasoned and wise elder.  Our society is deeply committed to individualism and self confidence.  While everyone should gain some skills in their various occupations, no one ever succeeds in life by themselves.  We all need to be taught, trained, and guided.  The ability to be an effective father or mother in the faith is given by God through much patience, effort, and a humble spirit. 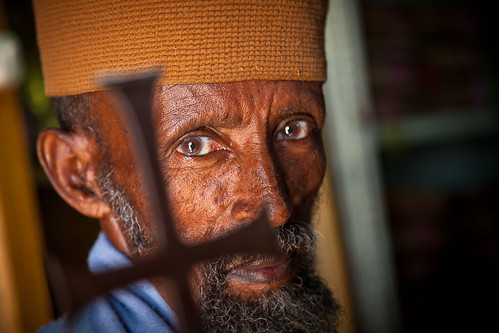 St. Macarius is well renowned for his spiritual wisdom.  Yet, one of his prayers begins with these words,

Oh Lord, forgive me a sinner, for I have never done anything right …”

This man has fasted and prayed as much as any of the holy men of ancient Christianity.  But, he uses a language that puts himself at the same level as the tax-collector in our Lord’s parable.  Macarius also is said to have not considered himself a true monk and that there were others who have pursued the holy life with greater fervor than himself.  The mind of a monastic is always to consider one’s self as not yet attaining righteousness while doing everything to seek it.  This humble mind frame keeps us from thinking too much of ourselves and from complacency in the pursuit of God.  Let us not forget that God gives grace to the humble.