I used to look forward to the month of August as it was a season of church services and great meals.   The African-American Baptist Churches in King William have their Homecoming and Revival services this month.  After the Sunday morning worship, there was a “dinner on the grounds” with relatives who moved up to DC, Philly, and other places up north.  Then about 3 or 4 pm, the first night of a week of Revival services will start.  When I was a boy, that meant preaching every night for six straight nights.  Now a days, some churches will have three nights of preaching, maybe a gospel concert, or whatever the congregation decides to do that year.

As an Orthodox Christian, I still look forward to August. But, things are way different.  The first 15 days of the month is the Dormition of the Theotokos Fast.  I can’t touch a piece of fried chicken, or two for $2.22 hot dogs at the 7-Eleven.   But, tofu and the occasional $20 lobster tail are cool.  This is a heck of a tradeoff until I remember why I am fasting.  The woman who bore God is very significant in the ancient Church as she was the only person with Jesus from the Annunciation, Nativity, Crucifixion and Resurrection.  I have to ask myself if I have given so full of an embrace of the Lord each day of my life.  To be honest, I tend to keep Him in neat little compartments throughout the day.  Even though I keep the Daily Cycle, I have rushed through a few sentences just to have an internal bragging point over my Catholic and Protestant friends and family.  Giving the Lord any real attention?  I have made that a secondary concern more often than I want to admit. 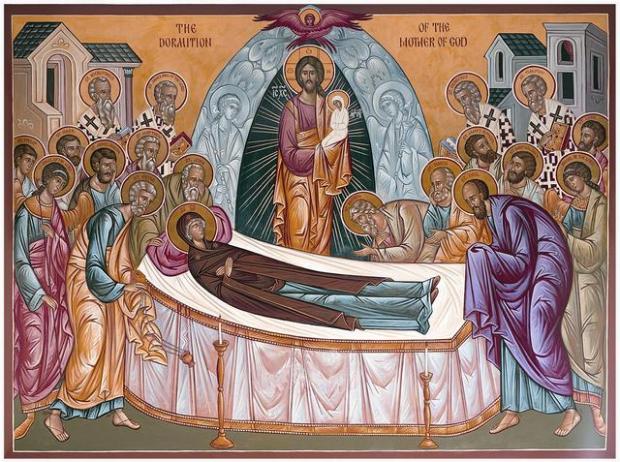 I am fasting to remind myself to follow Mary’s example to be consistent and humble when seeking to embrace God. She didn’t demand to be counted among the Apostles as they spread the Gospel throughout the world.  Living in the care of John the Evangelist, she didn’t go anywhere and evangelize as several women did.  But, her significance as the birth-giver of God the Son was not lost on anyone.  Almost anyone can say something about Jesus Christ.  The true test is that we have Him inside of us to where he naturally comes out of us and we follow Him to the point of death that we may celebrate His resurrecting power.  Can we do this without the desire to be the star of the show?  Can we do this 24 hours a day, 7 days a week and allow Him rule over our actions, words, and (even) thoughts?  Can we follow Mary’s example of bearing and sharing Christ?

I am sure I’ll have other opportunities to feast with my family and friends. I enjoy a cook-out as much as the next person and can hold my own on a barbeque pit and grill.  One of my former Baptist pastors taught that a fast is not only about giving something up, but putting something on to glorify God and grow spiritually.  So, my revival consist of adding something to my prayers, readings, and almsgiving as well as driving past fast food hamburgers.  When I can, I will attend the Paraklesis services.  I have left the Baptist years ago.  But August still remains a very important month for renewal.